Sites in the Holy Land

Ancient synagogues in the Holy Land

Ancient synagogues in the holy land: A visit to Um el-Kanatir synagogue

The Um el-Kanatir synagogue was discovered 100 years ago, by sir Lawrence Oliphant. In the past 10 to 15 years, it’s been reconstructed using a new technology by an archaeologist called Yeshu Dray. He owns ‘Restoration Ancient Technology, yeshua.com’. Consequently, he uses modern technology and different devices for reconstruction.

Also, Yair pointed out that they’re using x rays to look down into the stone to see what’s there without having to take things apart.

On the wall facing Jerusalem, you’ll find decorations of artifacts that were used in the temple but no longer exist. For example, the ark, the candelabra, and the menorah. Some stones in the Um el-Kanatir have been reconstructed.

Um el-Kanatir (a phase two synagogue) you sit facing Jerusalem. There’s the Bimah, which is an elevated platform from which the Torah was read.

The word synagogue means to convene in Greek. You may ask; what was function/phase one? when did phase one end? when did phase one or phase two begin? What’s the demarcation between phases? Demarcation is the destruction of the temple; the 9/11.  Saying 9/11 is symbolic. it’s Tisha B’Av (the destruction of the temple in 70 AD and is equated to 9/11 today).

Phase one synagogues were used for what Jesus did in Nazareth or Capernaum; that is teaching and reading. Once the temple was destroyed, the sacrifices were no longer happening. For phase one synagogues, the focal point was internal; people faced each other

There are only 7 phase one synagogues that have been found in Israel. Migdal has a recently discovered phase one. The Migdal synagogue is not very big and the seating area is facing inwards. People would sit around and assemble.

The temple was a centralistic institution, for political, religious, and economical purposes. Once the temple was destroyed, synagogues were established with the focal point facing towards Jerusalem. Phase two synagogues worldwide face Jerusalem.

On the Golan Heights, in the past 100 years, 33 synagogues that were built following the destruction of the temple have been discovered. There are approximately 100 phase two synagogues in the Galilee below. They have different shapes, different forms, and different topologies, but the focal point is external towards Jerusalem and it’s more elaborate. The 130 synagogues found show the ancient connection of the people to the holy land.

In Hebrew, one of the words for synagogue is a small temple; it’s a miniature temple substitute. There’s no Jewish architecture. They assimilated roman naive, isles, and pagodas.

There’s another synagogue not far from the Um el-Kanatir in Chorazin. There you’ll find the seat of Moses mentioned in Matthew 23:2 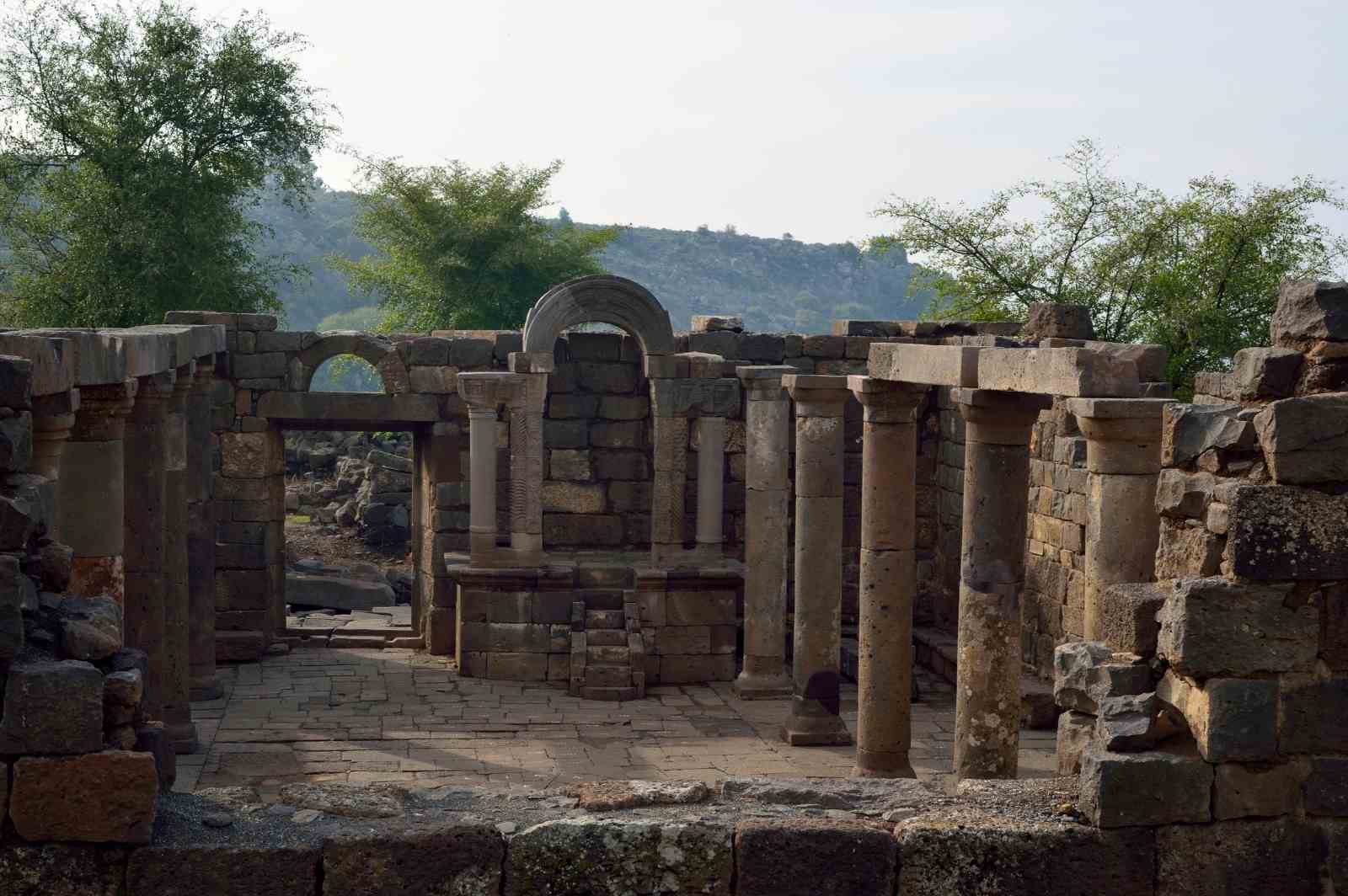